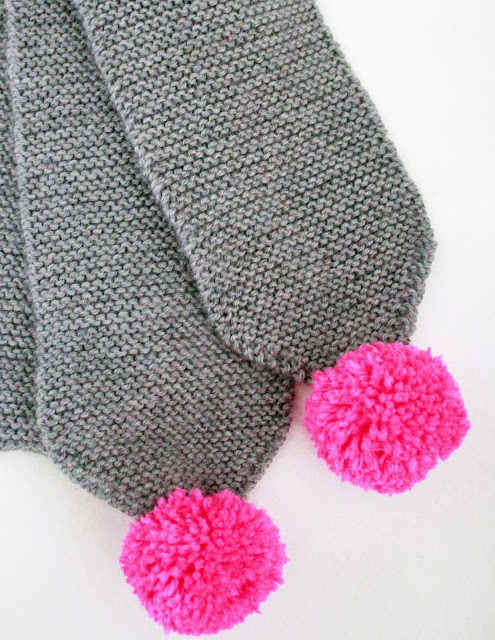 This is the scarf I started a couple of Sundays ago.  A lovely, long, plain-stitched one that I was able to pick up when I had a couple of minutes and mindlessly click away at.  It was especially nice having something constructive to do while being forced to watch 'In the Night Garden' for the hundredth time and watching Upsy Daisy have her daily conniption fit. 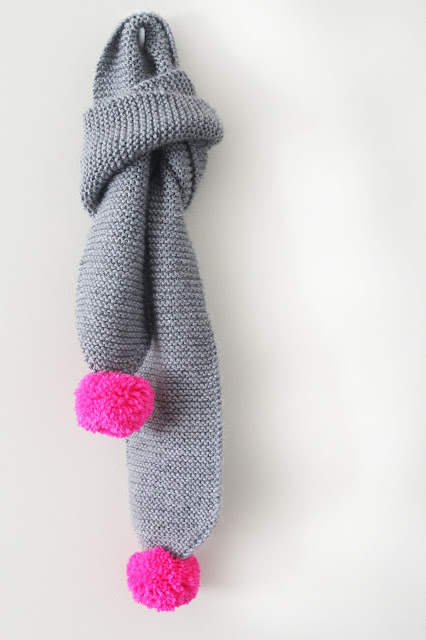 A pair of 4mm knitting needles
100g 8 ply yarn (I used Moda Vera, which is a soft acrylic) for the scarf
50g 8 ply yarn for pom poms (or raid your scrap box)
Optional:  A pom pom loom

Cast on 6 stitches
First row:  Knit into the front and back of the first stitch (you've increased one stitch!), knit to end of row.

Second row: Knit into the front and back of the first stitch (you did it again!), knit to end of row.
Repeat the last row until there are 24 stitches on your needle.  Knit every row until work measures approx 115cm (you can make it longer or shorter as you wish).

To shape end -
First row: Knit 1, knit 2 together, knit to end of row.  Repeat each row in this way until 6 stitches remain on your needle.  Bind off.

Make two pom poms (mine have a diameter of about 7 centimetres)  I made mine using the larger end of a pom pom loom, but if you don't have one, you can make them the old fashioned way.

I was worried Sophie might not take to her new scarf (she has learned the phrase 'I don't like it' and uses it with reckless abandon, especially in regard to food and clothes, and at the most inopportune moments).  But she did well to keep this on for two minutes before unravelling it from her neck and throwing it to the ground, charging at her brother and poking him in the eye - I actually think the neon pink pom poms served as a distraction, sort of blinding her into submission.  That is, until she got used to them.  If you happen to make one, I hope you have better luck. 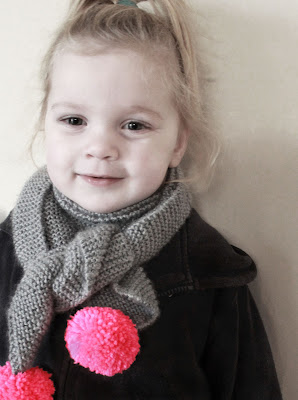