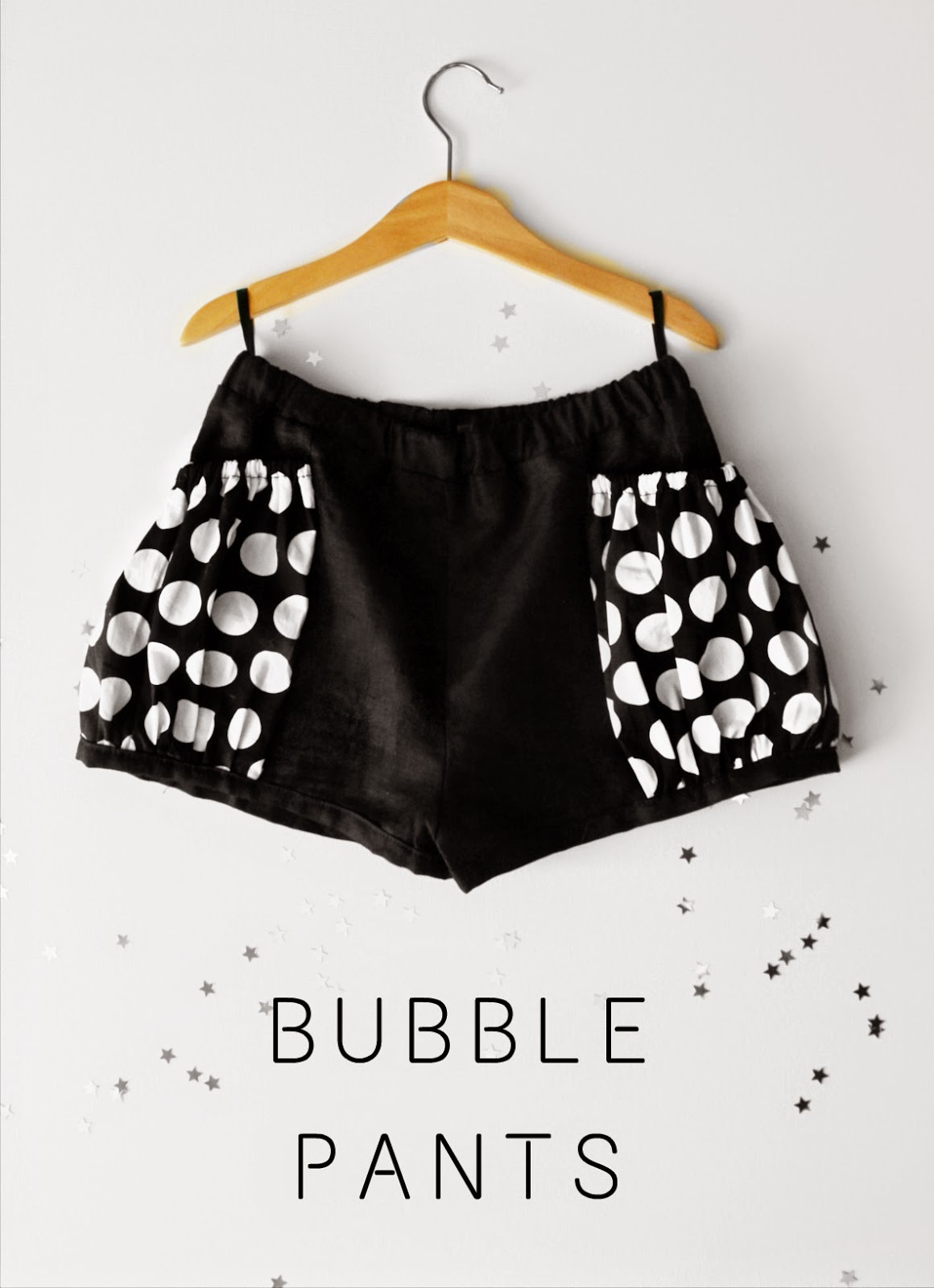 If you're a regular visitor, you'd know that Sophie owns hundreds of pairs of home sewn bloomers, but I wanted to try to make some that were a bit different than her regular ones.  These are one of the test pairs I've run up, based on a pattern from this book.  I say based, as after the initial run through, some of the pattern pieces needed a bit of re-drafting, which is NOT a fault of the book, but rather somebody's round tummy.  Sewing would be a whole lot simpler if my girl was a more standard size.

I had some black linen left over from a previous project and managed to get the main pieces of the shorts cut from it (after some jiggering about).  The pockets were cut from a fat quarter of quilting cotton I bought years ago when I had a thing for spots.  Everything matched up really well, which is not always an easy thing to do when you're working from your scrap pile. 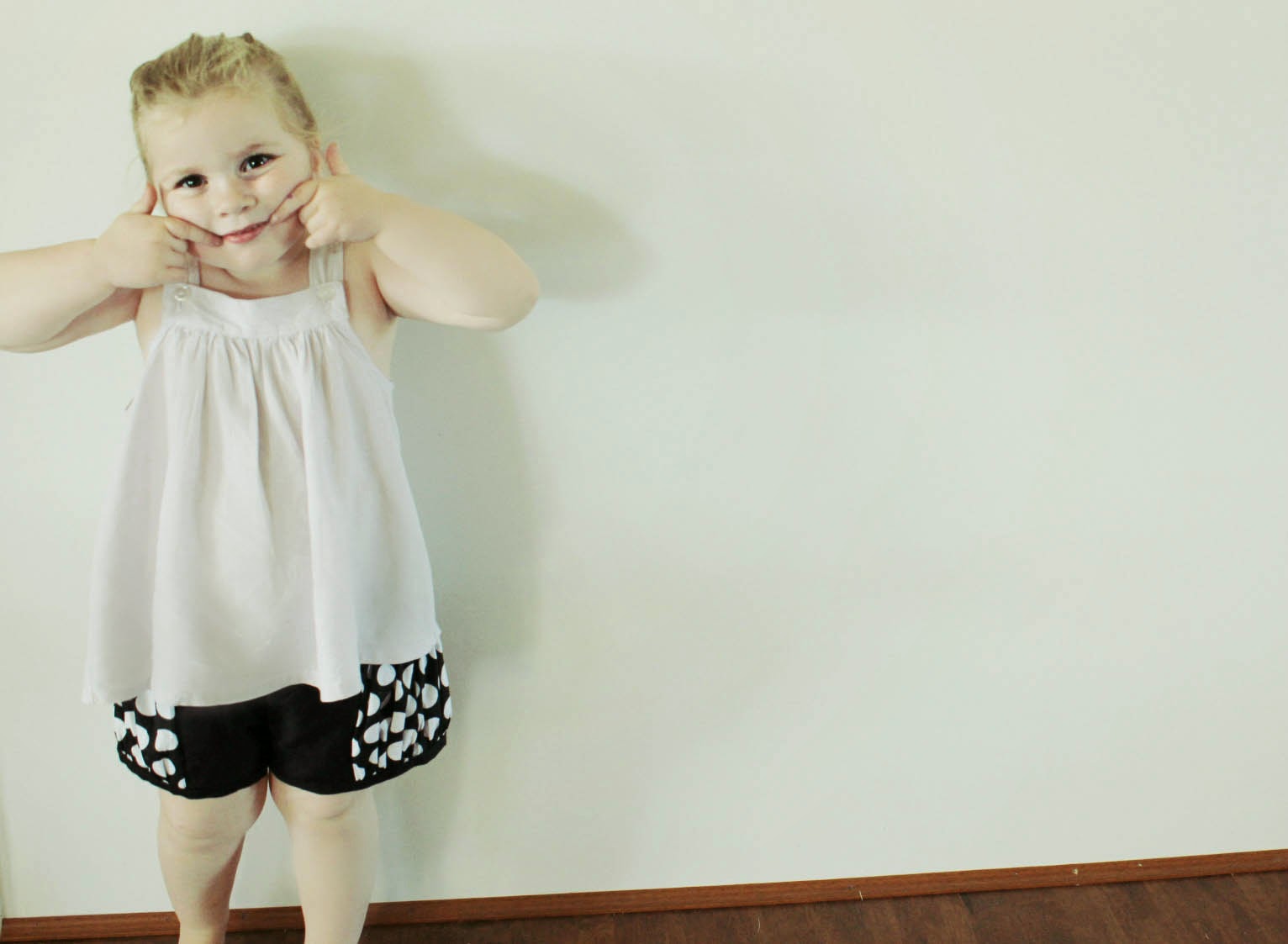 Of course, these took a bit more time than one of my standard run-them-up-in-an-hour stick-elastic-thorough-all-casings efforts, but the construction is really simple, and they look much more polished.

Actually, these took a lot longer than they should have.  Ten days, approximately.  This included the initial ones, the pattern drafting, the procrastinating, etc.  I just wasn't in the mood.  I have been having a bad run with the sewing machine of late, and have just had to get up and leave it be for days at a time.  I get phases like that. 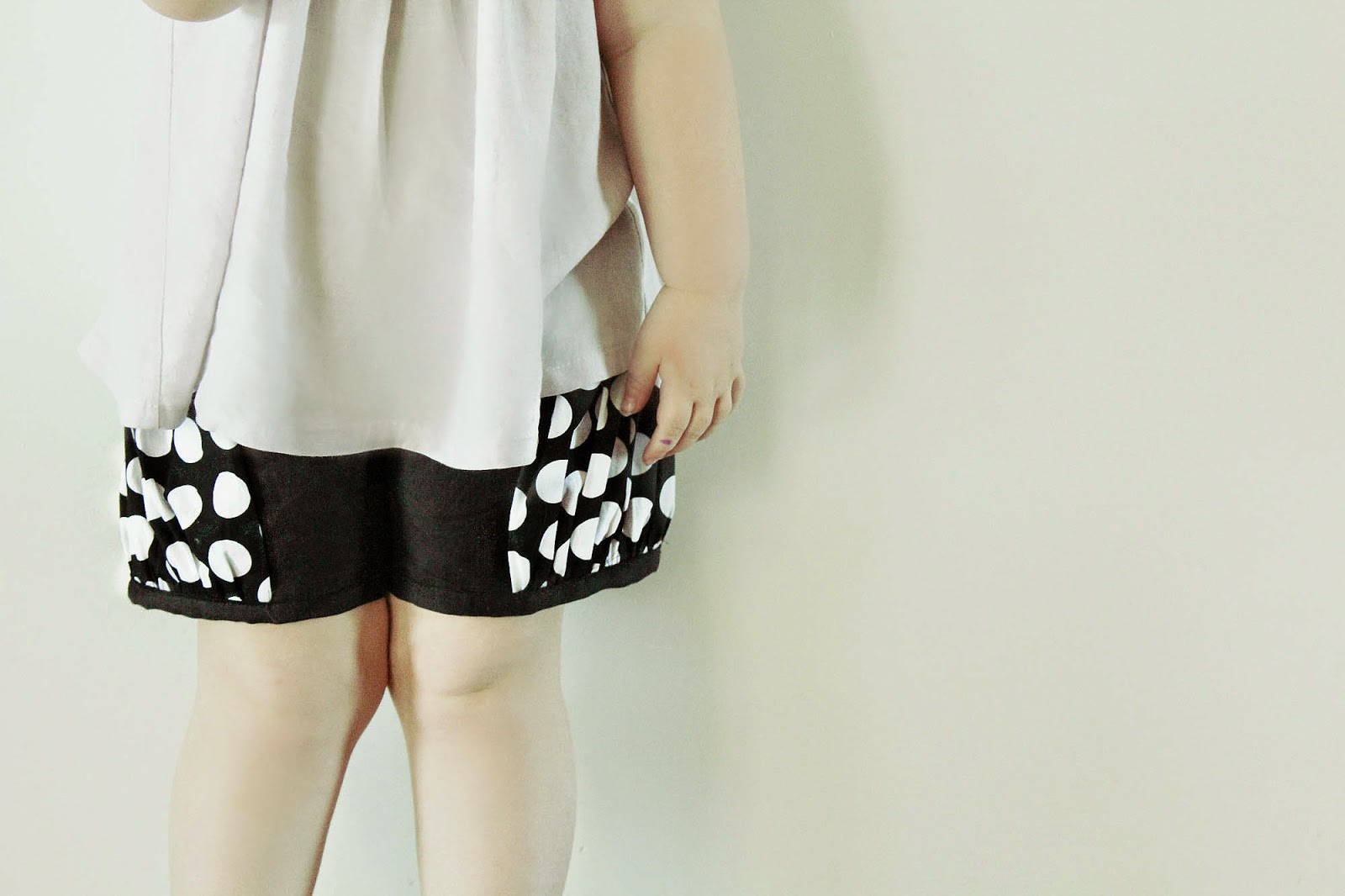 I really love that the pockets can be made out of a scrap of eye catching fabric you might love but not have any other use for.   In addition, the pockets themselves serve as a wonderful cache for all sorts of treasures.  Sophie had been wearing them for an hour before I managed to grab the camera and take these shots.  After taking photographs, I changed her into long pants and found inside these ones some stickers, a half-eaten cracker, two buttons and a texta lid. 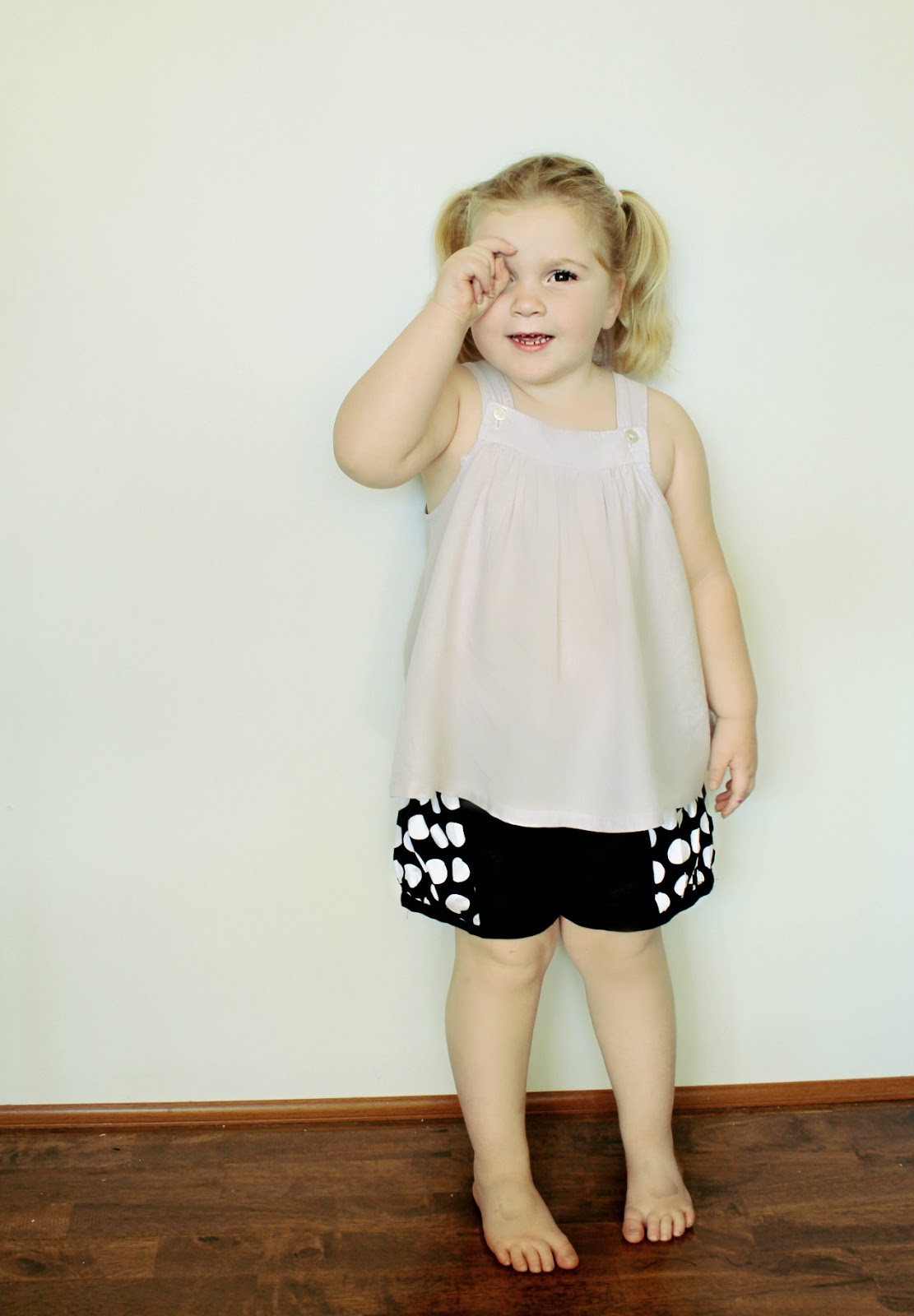 I may be inclined next time to redraft the pockets (again!) into panels that extend the entire height of the shorts.  If she managed to collect that many trinkets in the space of sixty minutes, there's no telling what might end up in those pockets after wearing them for an entire day.  I would not be game to check.  Other than that, though, these are great, if you have a child-sized child (if not, it's easy enough to widen the shorts panels and pocket, and adjust the waistband and leg binding to fit).  I want a pair! 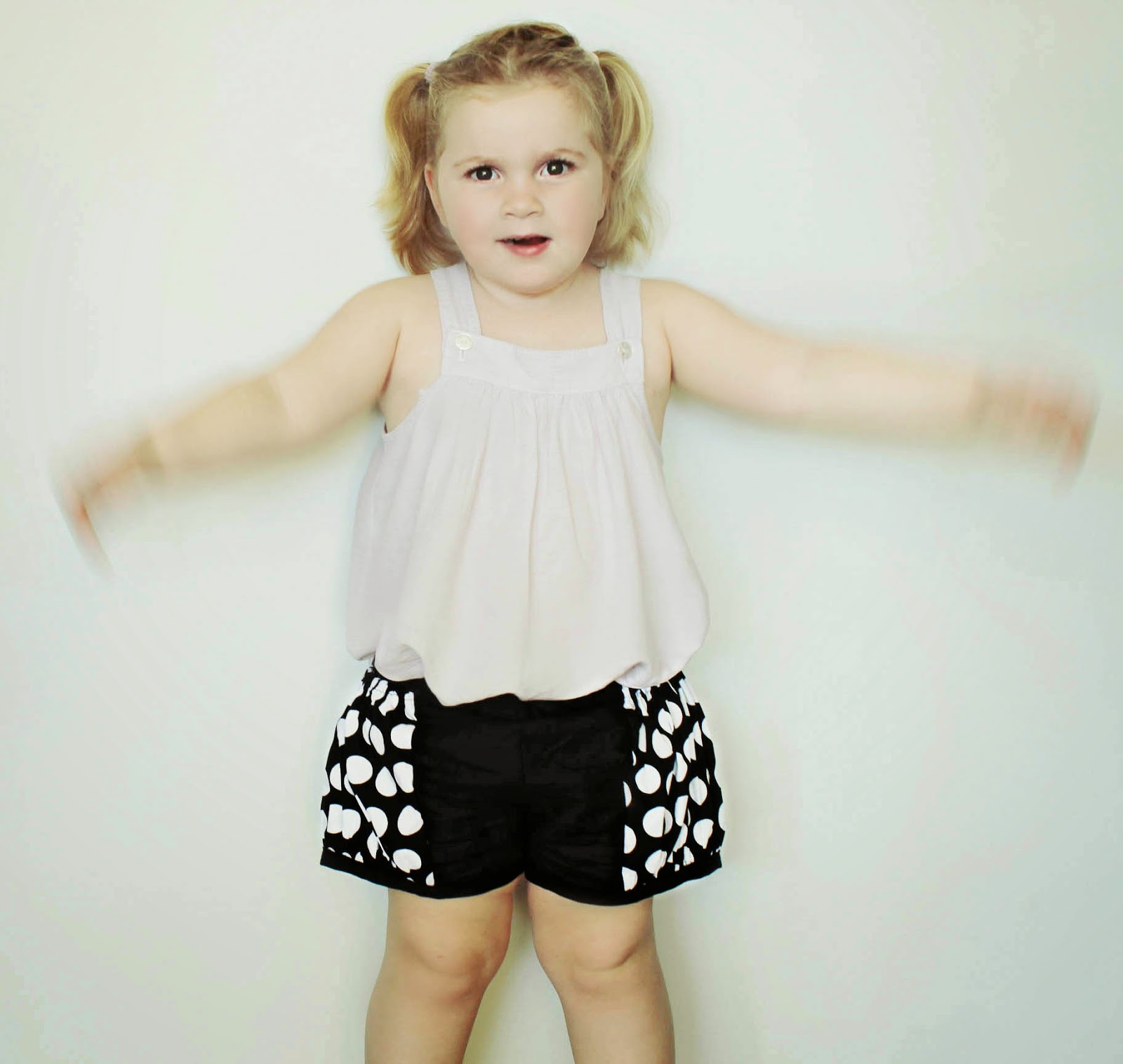