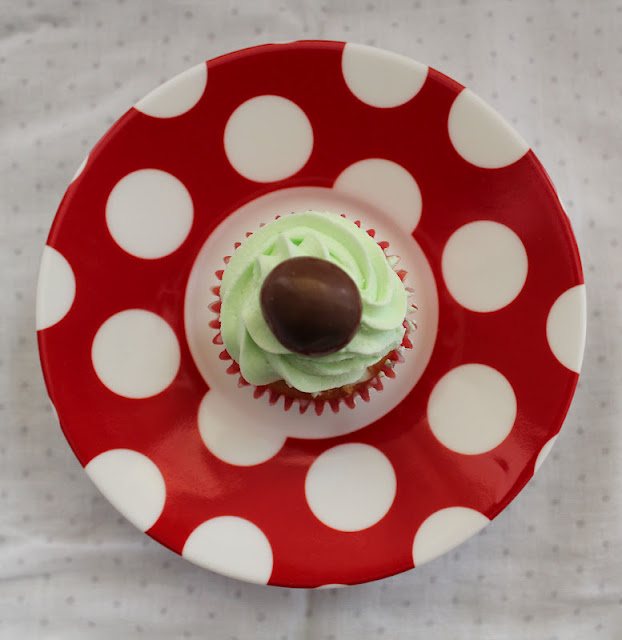 It's school holidays, and as I'm sure a lot of bored kids do, Cameron requested to be let loose in the kitchen.  I said yes, provided that we share the spoils among our friends and family.  There is still LOADS of chocolate in the fridge (and the cupboard) from Easter, and feeding the kids baked goods loaded with more sugar will do little to help my current frazzled mental state.  Although, the real culprit behind my exhaustion is the one year old.  She is an unstoppable ratbag (albeit a very cute one, lucky for her!).

So, yesterday we visited the supermarket.  Cameron chose a banana cake mix (which would not have been my first choice, but it was his project) baked into baby cakes, swirled with green vanilla butter-cream and topped off with a Malteaser.   He practiced his swirls on a plate before icing his cakes.  But he got the hang of it pretty quickly and I have to say I am pretty impressed with his piping skills!  Champion!  And, my gosh, we ended up making nearly fifty!  It really was a production line-type scene in my poor little kitchen. 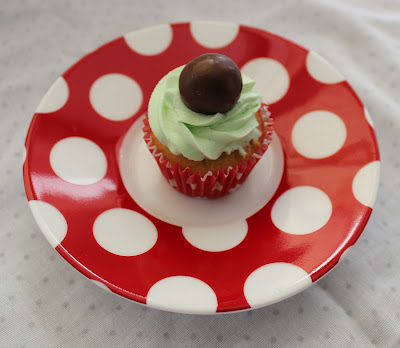 I've been bringing home plastic inserts from work which are the *perfect* size for popping baby cakes into.  Of course, we wash them first. 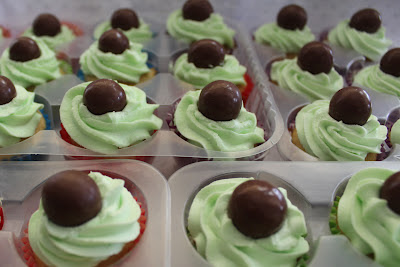 We wrapped them up in cellophane (the Malteaser helped to stop the wrapping smearing Cameron's lovely swirls) and topped each pack with a home-made label.  He was so impressed with his efforts, he suggested we head straight over to the shopping centre and sell them to the Woolies bakery.  Oh, the innocence! 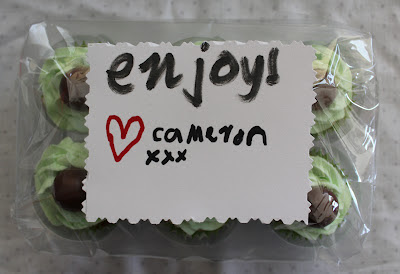 But instead, once Paul was home and Sophie was in bed, we jumped in the car and dropped them at a couple of friends' houses, texting them once we were down the road, with cryptic messages leading them to where we left them at their front doorsteps.  Well, no, not really.  We just messaged them to check outside their door, because we left them cake.  It is raining after all.  We'd rather they be found quickly than become a six pack of soggy green goop.  And besides which, there is a slug epidemic around here - ewwwww!  A cute little packet of cakes would just lose all their charm if they were found covered in big fat slugs!  Ughhhh!!!

And there was even enough left over for me to take over to my friend Sarah's house when I went to visit this morning - bonus! 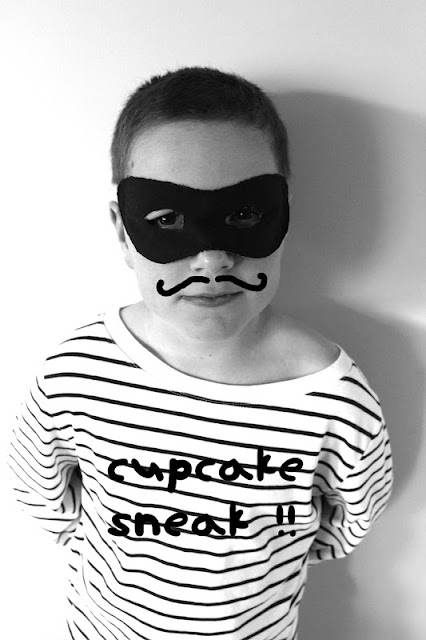 Hmmmm, I wonder when he will strike next?